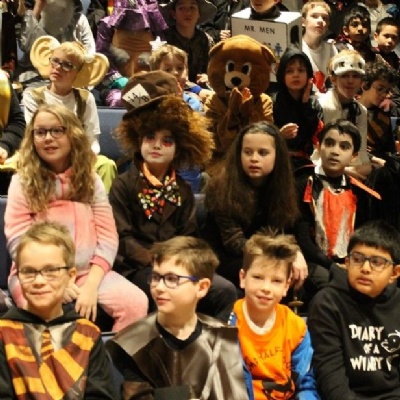 St. Andrew’s School Woking celebrated World Book Day this year focussing on the genre of fantasy, and science fiction in children’s literature. The whole school were involved and thrilled to have two highly acclaimed authors, Daniel Blythe and Miriam Moss, run inspiring workshops throughout the day.  World Book Day is a worldwide celebration marked in over 100 countries around the globe, encouraging children to explore the pleasures of books and reading.

Daniel Blythe is a writer of books for children, young people and adults including some of the successful Doctor Who novels (BBC Books) and audio plays (Big Finish). His novel Shadow Runners has been sold all over the world including the USA, Germany and Brazil. Emerald Greene and the Witch Stones came out in 2015, with a sequel in 2017.  Miriam Moss was born in England, but grew up in Africa, China and the Middle East and brings this rich heritage to her writing. She is the award-winning author of over seventy-five children's books (Doctor Molly’s Medicine Case, The Snoops, Matty in a Mess), both information books and fiction. Her book, Girl on a Plane was based on the true story of a hijacking and was nominated for the 2017 CILIP Carnegie Medal.

The two authors gave inspirational workshops, delighting the children as they helped them to learn more about how to write daring science fiction stories and wonderful fantasy tales.  Staff from St. Andrew’s worked as a team to create a variety of workshops integrating literacy, ICT, music, art and PSHCE skills to further inspire and motivate the children.  To add a further sense of fun and drama to the occasion the children dressed as characters inspired by the literary genre of fantasy and held a costume parade.

Mr S Vitty, Year 5 Form Tutor and English Teacher, was delighted the children were able to gain such an insight from some notable authors, “the workshops energise and inspire the children and give them a real appetite to be creative in their own story-writing.”

As Ms J. Wheeler, Director of Studies and Head of English, described: “The lead up to the day -  walking down corridors populated with Daleks, portals, K9 and magical animals created a real sense of anticipation, culminating in a feeling of  exhilaration and pride at the wonderful work created by the children.”

To view more photos from the day, please visit the Gallery.