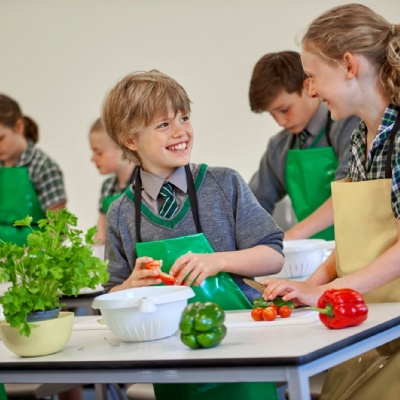 One consideration that many parents fortunate enough to be investigating the option of independent education for their children, is whether to choose single sex or a co-educational environment for their sons or daughters.  For parents, it is not helpful that the age old arguments for one or the other remain as entrenched as ever and ultimately it will only be the intangible considerations which will sway their decision one way or another. So why does this question still remain in this part of the Home Counties and what are the market forces that sustain it?

As the Head of St. Andrew's School, I am of course often asked for my opinion.  Whilst my answers are likely to support the vision of our school, I thought that the reader may wish to consider my genuine musings gained as a teacher who has worked both in a single sex and a mixed environment for over thirty years.  At this point I would like to stake a claim that there is a very great distinction between the benefits of co-education at Prep school level as opposed to a senior school. Many argue that single sex senior schools have better results and that the evidence is there for all to see.  Just look at the A Level and GCSE league tables! This is hard to argue against other than with the understanding that the schools featured in the higher reaches of these tables are invariably highly selective. In our area of course, there are certainly a sizeable number of single sex girls’ and boys’ schools and all provide a superb education for their students and they remain very popular.  I would speculate however, that if there were an increased number of co-educational options available, this picture would alter significantly. Many parents I have assisted in the decision making over the years would have much preferred a co-educational school for both their sons and their daughters had there been a greater number available. The success of senior school single sex schools is as much ensured by a lack of choice than by their own worthy merits.

It is in the Prep school sector however, that I believe the really important decision should be made. It is in these formative years that our understanding of social rules are formulated and this very much includes the building of an understanding about the similarities and differences between boys and girls. I often witness in the early years of our children’s education, boys and girls playing together happily and oblivious to their gender. This is incredibly healthy and sets the tone for later years when friendship groups tend to be defined by the same criteria. Our boys and girls in the senior part of the school have known each other for years, are comfortable and not fazed by each other’s presence. They fundamentally understand that they are part of each other’s lives and thus they gain a broad appreciation of the other’s frame of reference. Surely this can be no better a preparation for life in the world beyond no matter the school of choice.

Do boys hold back the progress of girls in the classroom?  Categorically not! In fact it is our experience that girls bond extremely well and are supportive of each other in all their endeavours, thus enhancing their results across the board. The presence of boys and girls in a class is ultimately a ‘civilising’ factor for both. It creates an environment where the social issues often encountered in girl only classes are minimised. For boys it provides a sense of purpose to their studies and encourages by comparison a strong calming work ethic.  Ultimately such an environment is ‘real’! It provides a bedrock for the future and reflects the world beyond our doors. In my opinion there can be no more important aspect to our children’s education.