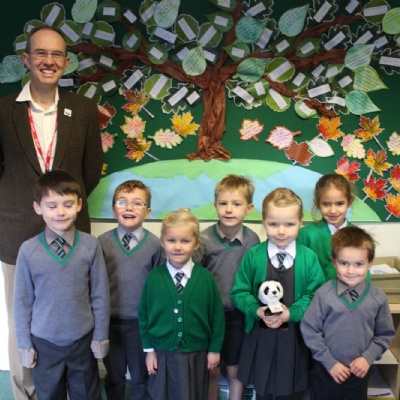 We were delighted to welcome Dr Stephen Cornelius to our assemblies yesterday. Dr Stephen Cornelius is the chief adviser on climate change at WWF here in Woking.  In his work he talks with all sorts of people about climate change – including scientists and businesses to governments and the media (and now school students).  This year he has worked on WWF reports about the impact that climate change has on wildlife in the UK and around the world and on how nature can help us tackle the climate emergency.

Stephen has just returned to Horsell after two weeks at the COP26 climate summit in Glasgow.  His role in Glasgow was to lead for WWF on science issues including around global warming of 1.5 C and talking about nature and climate change with governments and media from around the world.  He joined the Global Day of Action on Climate Change March in Glasgow – dressed as a panda.  COP26 was the 14th climate summit for Stephen – five with WWF and nine in his previous role as a climate change negotiator for the British government.